Think Carefully Before Accepting A “Smart” Or “Advanced” Power Meter 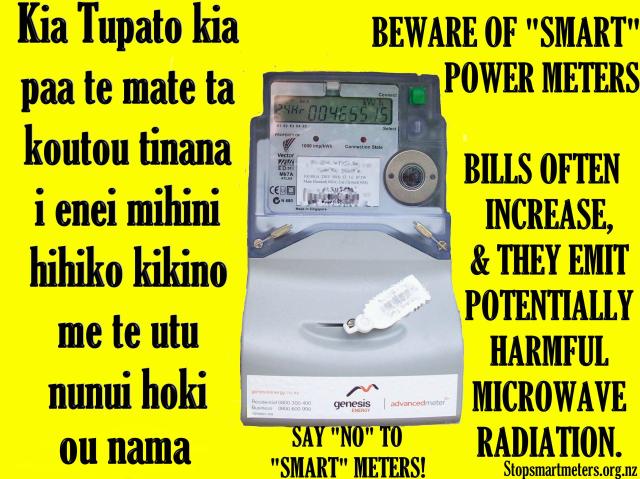 While the German government rejected “smart” meters because they were not in the interests of consumers and a major US power company, North East Utilities admitted there is “no evidence” to show they are “a good choice for customers,” the public in New Zealand frequently only hears about their supposed benefits.  For example, some New Zealand power companies claim “smart” meters lead to highly accurate meter reads.

I live in Whangarei, Northland, where some power bills have doubled, tripled and much more following the installation of one of these supposedly “accurate” meters.

Fortunately for the power companies, what they also call “advanced” meters, have an ability to measure a contamination on the lines called “reactive” power, which is power you can’t use, but power you can be legally charged for.

Nicky Chilton of The Electricity Authority advised in answer to an OIA request in an email dated the 12th of January: “There are no specific laws that govern what retailers charge their customers, so charging for reactive power won’t be illegal.”  Chilton added: “We don’t regulate retailers…”

Another serious issue with “smart” meters, which electricity retailers are not advising customers about, is that they emit radiofrequency radiation, (RFR).   RFR is a form of non-ionizing radiation. Smart meters, cell phones, wifi and cordless phones all generate non-ionizing RFR (3kHz to 300 gigahertz, or GHz) and microwave (MW) radiation in the range of 300 MHz to 300 GHz. Microwave radiation and radiofrequency radiation are often grouped together as RFR/MW).

“Smart” meters emit radiofrequency radiation, which was designated by the World Health Organization as a Class 2B carcinogen.

In addition, there are over 6,000 studies which show biological effects from the same form of radiation.  If you think you will be protected by Government regulations, then think again.   As environmental and public rights lawyer of Nelson, Sue Grey advised:   “The major problem in New Zealand is that the New Zealand Standard: NZS2772:1 1999, protects only against the immediate “heating effects” of Radiofrequency Electromagnetic Radiation, (RFEMR), based on occupational exposure of fit men for short period of time.  It offers no protections against longer-term cumulative “biological effects” on cell function and replication, hormonal functions, brain function, allergies/electro-sensitivity and so on… The maximum permitted limit is New Zealand is very high, by Parts 9 and 10 of NZS2772:1 1999 do require some precautionary action – however, these are often ignored.”

There are thousands of reports globally of people who suffer from symptoms including insomnia, headaches, tinnitus, lethargy and cognitive disturbances following the installation of a “smart” meter at their home.

In addition, everywhere in the world where these radiation-producing “smart” meters are introduced, people have reported adverse health effects, including nausea, headaches, tinnitus, heart palpitations and insomnia.

According to Dr Dietrich Klinghardt, MD, PhD, who treats patients with chronic illness, the huge increase in chronic neurological illnesses, such as insomnia, fatigue, numbness, low-grade depression, autism and learning disabilities, is associated with the exponential increase in exposure to man-made electromagnetic fields, produced by devices such as cell and cordless phones, wi-fi and smart meters.  He believes “smart” meters  have “devastating consequences” to health.  Learn more:  Dr. Dietrich Klinghardt – Smart Meters & EMR – The Health Crisis Of Our Time.

Many types of “smart” meters have been associated with health problems, including those that use RFR mesh technology, such as the Landis+Gyr E350 fitted with a “Silver Spring” combined modem and ZigBee unit.

Another common type of “smart” meter associated with health issues is an EDMI, which may be fitted with a Sierra Wireless EWM GRPS 100 modem and can use Vodafone’s GRPS mobile network to send data.

A good example of health problems some people experience when living in a home with a “smart” meter was reported recently to Stopsmartmeters.org.nz by a woman who moved into a new home in Christchurch. Her new residence had an EDMI Mk7A meter on the outside of her bedroom wall.  Although her husband felt no-ill effects, she started experiencing headaches and intense nausea at night.  Fortunately, she was aware of the potential for “smart” meters to cause health problems, so asked her power company, Contact to remove the meter’s modem, which was done for a fee of $125.

There are reports of power companies advising customers that “smart” meters do not emit radiation.  This happened to Maxine H. in Whangarei, who was told by Genesis, her power provider,  that her meters did not emit radiation shortly after they were recorded emitting 418mW/m2   as shown in the video.  Bear in mind when watching this that 0.1mW/m2   and below is regarded as safe during the daytime, according to the BioInituitive Report, which takes into account the evidence of biological effects on health from RFR:

A number of Meridian customers have recently advised that they were told that they have no choice but to accept a “smart” meter.   If your power company tells you “smart” meters are compulsory, and you do not want one of these devices on your home, find a company which allows you to choose. For example,  when I advised my power provider, Pulse Utilities, the electricity retailer operating under the Just Energy brand, that I did not want a “smart” meter, I received the reply: “Thank-you for the information.”

“Smart” meters are not compulsory according to the Electricity Authority, yet not easy to get rid of once installed.  If you do not want one, inform your electricity provider and put a lock on your meter box.

TrustPower’s community relations manager, Graeme Purches was quoted by the Marlborough Express  as saying that the only people benefiting from smart meters were electricity retailers, who could control the usage and increase the electricity prices at peak demand.

Interested in what is genuinely going on, not in the disinformation promoted as "truth" by the corrupt mainstream media. Please keep an open mind and do your own research. M.Sc. (Hons) from Auckland University. If you came to this site via the 'Silly Beliefs' disinformation website, please read my response to their article at the link: https://chemtrailsnorthnz.wordpress.com/2012/10/20/sillybeliefs-coms-lies-about-chemtrails-geo-engineering-exposed/
View all posts by Clare Swinney →
This entry was posted in Uncategorized. Bookmark the permalink.