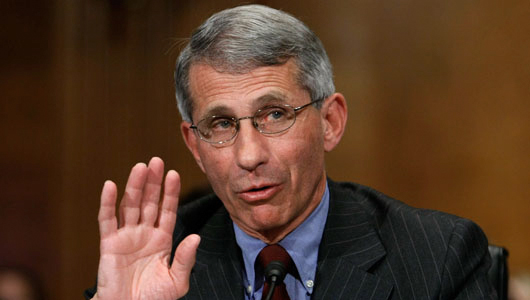 Dr Anthony Fauci, Promoter of getting vaccinated for the H1N1 flu

Los Angeles–America’s leading promoter of getting vaccinated for the H1N1 flu, Dr. Anthony Fauci, Director of the National Institute for Allergies and Infectious Diseases (NIAID), has admitted knowing nil about how human immunity responds to vaccinations, according an interview published by Bloomberg.

Dr. Fauci’s stunning admission came in response to questions raised by a study of 16,000 volunteers vaccinated against HIV with results alleged to be promising, but for reasons unknown. The unexpected outcome “tells us that we don’t even know what the correlates of immunity are,” Dr. Fauci said, referring to the measurable signs that a person has developed immunity to genetically-engineered surrogate viruses now used in the new flu vaccines.

“This is what honest intelligent vaccine critics have been saying all along,” said Dr. Leonard Horowitz, a Harvard-trained emerging diseases expert that has condemned vaccinations as “outlandishly barbaric and horrific, with risks far worse than using blood-letting leeches.”

http://www.healthyworldmessage.com/images/Len_New_Headshot_med.jpg Dr. Horowitz recommends vitamins C and D, and covalently-bonded silver hydrosols that safely electrocute viruses, parasites, and pathogenic bacteria, instead of using intoxicating vaccines and drugs that produce horrible side effects. He also recommends healthy lifestyles beyond hand-washing and mask-wearing. He says that alkalizing diets with good pH8 hydration can protect people completely against the flu and most chronic diseases.

In evidencing Dr. Fauci’s fraud, Dr. Horowitz encourages everyone to discern author reliability. Fauci is the senior author of a recent article in the New England Journal of Medicine that neglected important historical facts concerning the genetics of this novel H1N1 virus.(See: NEJM Vol. 361;3:225-229, July 16, 2009) Other authors in the same publication provided more thorough disclosures supporting Dr. Horowitz’s claim that “laboratory sourced” outbreaks occurred in 1977 and probably by military experiment in 1976.

“This H1N1 flu virus was also “laboratory sourced,” Dr Horowitz says.  It is clearly a combination of Asian bird, Mexican pig, and human corpse virus from the 1918 Spanish flu that vaccine-makers dug up despite protests by scientists worldwide.”

In Horowitz’s view, Fauci is guilty of “gross criminal negligence” and “drug prostitution” with direction from the Central Intelligence Agency (CIA). It is material fact that the CIA, David Rockefeller, and associates in the Partnership for New York City (PNYC) including Co-Chairman Rupert Murdoch,  news releases and dissemination of intelligence by Fauci’s agency, the NIAID, and “biopreparedness” policies generally, for “national security” according to their own documents and the Washington Post.

“This is a compelling reason to stop vaccinating people immediately,” Dr. Horowitz explains. “People need to wake up and reject these vaccinations. It’s insane to advance this H1N1 vaccine program knowing the likelihood of creating worse pandemics, unless your intention is depopulation.”

Last week Dr. Horowitz sent the FBI an official AFFIDAVIT.  Legal groups are using this AFFIDAVIT to petition courts for injunctions against the FDA and state health officials that are certifying the new flu vaccines” safety. Toxicology science proves otherwise.

including his close friendship with the infamous AIDS researcher Dr. Robert Gallo, credited for allegedly co-discovering HIV. Dr. Fauci is a co-patent holder on an ingredient used in the new vaccines for AIDS and H1N1 flu. The chemical is called interkeukin-2 (IL-2) and it is thought to boost cellular immunity. (See patent No. 5,696,079; Dec. 9, 1997) Fauci credits Gallo for his co-discoveries in the field advancing IL-2, the “immunologic enhancement” of vaccines and other “geneto-pharmaceuticals.” This discovery is central to all gene therapies and the future of vaccines. The assignee on this patent is “The United States of America as represented by the Department of Health” that licensed IL-2 to CHIRON Corporation for use with other vaccine additives called “adjuvants.”

The Associated Press reported that Fauci received at least $45,072.82 in royalties when the government licensed IL-2 to CHIRON, the drug industry’s major supplier of chemicals. The IL-2 adjuvant is formulated with other toxic chemicals including nonoxynol-9, a spermicide and HIV-killer linked to spontaneous abortions, and thimerosal, causing brain damage and widespread autism in children.

Fauci, allegedly, donated his IL-2 royalties to charity to avoid conflict-of-interest charges. But he admitted it was his decision to withhold disclosures to patients and reporters researching IL-2 in the trials that he supervised.

“I am aware that IL-2 is the “common denominator” among immune system functions, and can cause severe side effects,” Dr. Horowitz wrote for FLUscam.com. Dr. Horowitz remains concerned that CHIRON may be adding IL-2 in is “proprietary” formula secreting this knowledge so that Fauci’s conflicting interests, and close ties to leading drug industrialists, go unnoticed.

In a recent study, IL-2 caused no benefit whatsoever stimulating the immune systems of 5,800 subjects at a cost of $85 million. CHIRON and taxpayers paid the tab. Yet, more money and time will be spent researching Fauci’s co-discovery to advance next generation vaccines and “geneto-pharmaceuticals.”

Fauci’s ignorance, knowing nil about the “correlates of immunity” affected by vaccine toxicity is unnerving.

Interested in what is genuinely going on, not in the disinformation promoted as "truth" by the corrupt mainstream media. Please keep an open mind and do your own research. M.Sc. (Hons) from Auckland University. If you came to this site via the 'Silly Beliefs' disinformation website, please read my response to their article at the link: https://chemtrailsnorthnz.wordpress.com/2012/10/20/sillybeliefs-coms-lies-about-chemtrails-geo-engineering-exposed/
View all posts by Clare Swinney →
This entry was posted in Pandemic, Vaccines and tagged Dr Len Horowitz, Dr. Anthony Fauci, Fauci, H1N1, Len Horowitz. Bookmark the permalink.