Posted on September 8, 2009 by Clare Swinney

By Clare Swinney Now in her 90th year, Betty Hooper, who is involved in the truth movement, is still very active and mentally alert.  Notably, she was not vaccinated when a child, nor has she lived in areas that have had fluoridated tap water and has made a point of avoiding food additives such as MSG and Aspartame.   She shares her thoughts on what she believes has helped her stay fit and healthy all these years. 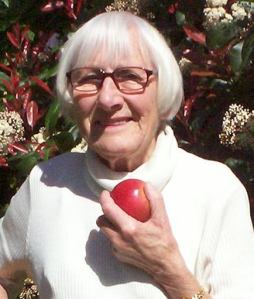 Betty Hooper recently returned from a seven-week long holiday to Europe and displayed the tattoos she got while in Denmark. Her tattooist said she was the oldest client he had ever had.  She said she did it for a dare.  In light of the fact that Hooper, who will be 90 years old on her next birthday, still has her good health, a canny intellect and a love of life, while many her age are winding down, this is about her and her personal recipe for living a long, healthy life.

This confoundingly lively woman lives in a small town in Northland, New Zealand called Hikurangi, where she stays in a house that has a painting studio and a room for displaying her work.  As well as an enviable collection of silk artworks she has painted herself, she has a number of unique patchwork jackets, a range of knitwear and greetings cards, which she created to sell at markets around Northland.  Surprisingly, she drives everywhere herself and says  she recently went on a car trip which lasted more than 4 hours in order to get to a place near Raglan, and had no difficulty doing so.

An educator by nature, she teaches special needs children how to read,  mature students how to paint on silk and people how to spin wool.  When requested, she gives talks to local community groups about her own research into the impact of diet on behaviour, which has taken her overseas.

In so far as her healthcare is concerned, Hooper’s upbringing has differed from that of many others as her mother was “dead against vaccines.”  She did not receive any shots until forced to do so when she immigrated to New Zealand from England at 48 years of age.

When she suffered from illnesses as a child, her mother treated her with homeopathic preparations or took her to the outpatients’ clinic at the Homeopathic Hospital in Hastings, Sussex.  She says they have worked to successfully treat a problem with polyps a conventional specialist told her would be with her for the rest of her life.  “It tells you something that these preparations are used by members of the Royal family,” she offers.

Throughout her life, Hooper says she has lived in areas where the tap water has not been fluoridated.  Fluoridated water has been shown to have a number of negative effects upon health, as the Fluoride Action Network has reported.  For instance, 18 human studies have found elevated levels of fluoride exposure to be associated with IQ deficits in children and an association between long-term consumption of fluoridated water and increased hip fracture in the elderly has been found.

She drinks goats’, rather than cows’ milk.  She used to have a herd of goats herself and found it was very useful to give to  infants who had an allergy to cows’ milk.   She says goats’ milk is preferable for a number of reasons, including that the fatty acids in goats’ milk helps prevent atherosclerosis and Alzheimer’s disease, plus it contains 13% more calcium, 25% more vitamin B, 47% more vitamin A and 134% more potassium than cows’ milk.

Five hours sleep a night is all she needs and she does not have any difficulty sleeping.  She has never smoked cigarettes and believes in the benefits of getting a healthy dose of vitamin D from the sun regularly.

On the topic of her diet, she describes herself as “a small eater.”  At breakfast she has a cereal, such as porridge and a cup of tea. At lunchtime she often has a salad with cheese or a ham sandwich, which is occasionally accompanied by a glass of her home-made stout.   For dinner she says she invariably has a hot meal, four a week of which are free of meat and this is often followed by her stout or an ale.

She is particularly wary of processed food and keeps a close eye on food packets to see what additives they contain by reading the fine print.  “It’s important to watch out for a variety of additives, including MSG, and aspartame [which is often referred to as ‘951’ on labels],  in food and drink products, as they can cause serious harm,” she asserts.   She should know.  She has done a great deal of research into this.  In fact in 2005, she travelled to Cuba to do research into the relationship between diet and ADHD, the most common diagnosis given to children and adolescents by the Mental Health Services in New Zealand.  But that is another story.

Interested in what is genuinely going on, not in the disinformation promoted as "truth" by the corrupt mainstream media. Please keep an open mind and do your own research. M.Sc. (Hons) from Auckland University.
View all posts by Clare Swinney →
This entry was posted in Natural health news, New Zealand, Vaccines and tagged aspartame, Betty Hooper, fluoridated, fluoridated tap water, goats' milk, homeopathic, homeopathy, MSG. Bookmark the permalink.